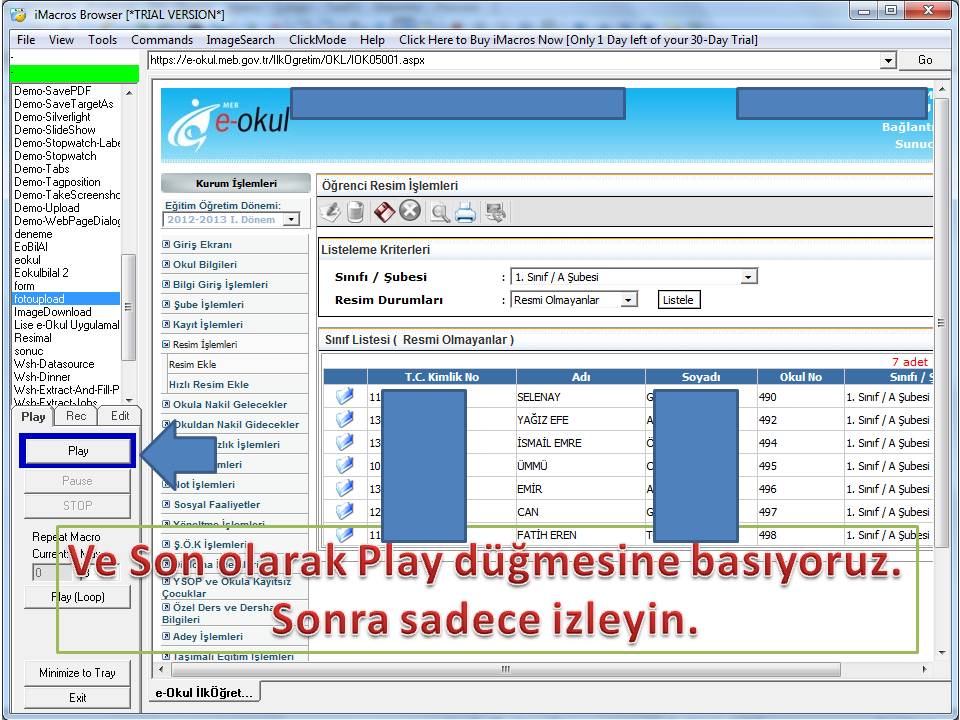 There is a separate changelog for the iMacros for Firefox and iMacros for Chrome browser addons. Older versions are available for customers to download via their Ipswitch Community account or upon request.

Faster and more reliable Image Validation algorithms C and D. The new Algorithm B uses memory more efficiently New: Completely redesigned iMacros Editor 12 , with custom syntax highlighting New, modern look in the editor including all dialog windows The most used functions are now always at hand in the sidebar tools panel New: Dark and Custom code highlighting themes reachable from the Settings menu An iMacros Code Color Styler that allows you to set the highlighting colors for the iMacros code.

The settings are saved in an xml file that can be transferred and used on other iMacros installations. Completely redesigned UI New colors, modern and clean design, user friendly experience Simplified iMacros Browser main menu.

Redundant items were removed Play, Record, etc. No more switching tabs between record and playback actions Play button now includes play loop functionality Recording Options can be docked to iMacros Browser window and accessed at any time during recording Open new tab from the tab context menu You can now sort your macros also by date, placing the most recent on top.

This way it is easy to find the last recorded macro New: Set a custom name for new recordings. It is also possible to add a timestamp to the new macro name New: Append recording to an existing file Added: There is no replay on failure Added: Encrypted macros and passwords using previous versions can still be decrypted, but in a non-compliant way.

The current value of! Download size calculation in status bar was not accurate Fixed: Clicking Stop when single-stepping through the macro plays the next command and then stops Fixed: Edit button error panel remains without action after running the macro from the Editor Fixed: Command line interface is calling the wrong bit instance of iMacros for IE iMacros. Page screenshot of IE from scripting interface iimTakeBrowserScreenshot does not get saved if the folder does not exist Fixed: Tray and silent modes are no longer working when using the scripting interface Fixed: Image Validation wizard "Add command" button should be enabled only when an Image is selected Fixed: It is now Fixed: Removed superfluous select components in the freeware and freeware samples installers Fixed: It uses now Local instead.

If this fails, it will create folder. Ipswitch in UserProfile Fixed: Usually associated with failure of making page screenshots and perform any Image Validation tasks in IE11, Windows Downloading the same file no longer creates a backup of the existing file 0Kb.

Use iimSetWindowTitle to change window title at any time between playbacks from scr. The variable is overwritten only during the macro runtime. Some elements of the Kendo UI web library not working with the iMacros browser.

Needs registry setting SetPointerEventNull to turn feature on. EVENT command does not scroll to the found object. Do not display waiting for image search thread. Trial version reporting trial expired when installing after iMacros for IE freeware has been installed for more than a month. SI error -4 message still referring to iimInit correct method name is iimOpen. Scripting interface not compatible with Kaspersky Anti-Virus on Windows 8.

Relative positioning not working properly after updating to iMacros Associate iimx files to iMacros. Edit disabled for encrypted. New download manager saves file using temporary file name. Besides this new variable, it is possible to use the preset values of! Added shortcut to the Samples installer in the iMacros group in the start menu and on the desktop Fixed: Recording Office login fails Fixed: Playback of dynamically loaded drop-downs fails because iMacros does not know to wait Fixed: Many more smaller fixes and improvements!

IE and external sidebar "walking" off the screen when the Windows taskbar is positioned at the top or side of the desktop Improved: This option is available in the notification area tray icon Fixed: Samples now have their own installer which is called at first time use.

The key differences between the old and the new download manager are: Rewritten download manager, better suited for mass-downloading, web performance monitoring and load testing. Download specific timeout command: File size and name are returned in the variables!

Because of these important differences in the installer, notice that an uninstall might be required when upgrading. Use the iMacros Sidebar for all Internet Explorer versions. Crashes in Windows R2. The submit button event gets fired before setting the password when using the TAB key Fixed: Enable navigation using the TAB key during recording Fixed: Menu item works manually but not while recording Fixed: Also enables iimGetPerformance for Cr.

Changed location of iMacros Browser crash reports to iMacros Logs folder. To close the Sidebar use the close button in the Sidebar itself. Built-in AlertFox website monitoring integration - create and manage web transaction tests from within iMacros. If no plugin is installed, it opens the external Sidebar.